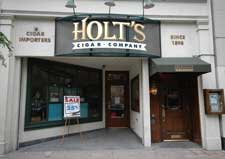 Don't be fooled by the name, Holt's Cigars, the store also has a very good selection of the leading brands of pens and is one of the few places in the downtown core of Philadelphia where you can find pens. 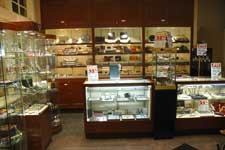 Located on Walnut Street, between 15th and 16th Street, the pen is a pleasant walk from Market Street, one of the main streets that run from the old City Hall and the historic section of Philadelphia with the Liberty Bell and Independence hall. Walnut Street is just three blocks over from Market, running parallel.

Holt's has been at the Walnut Street location fro the past twelve years. Adam Alalouf told me that he started with Holt's shortly after the move and he has been building up their pen business ever since. He's doing a fine job.

While the aroma of fine cigars is definitely in the area, the pen selection is in the front section of the store. There are a number of pen counters with a good selection of Omas, Visconti, Cross, Montegrappa, Aurora, Parker and Waterman to mention the lines that immediately caught my eye.

I visited the store in May 2008 and Adam explained that they were in the process of closing out the Montblanc line - part of Montblanc's retail re-alignment that was taking place with a number of pen stores. So while they had a good selection of Montblanc at the time of my visit, they will not be carrying the line in the future,

Holt's also carries a broad selection of inks that include Omas, Aurora, Visconti, Noodler and Waterman. Of course with ink being such a topic of interest to those to use pens I had to ask Adam what brand he liked the most. Noodler was one of the brands that he found to be very popular. You won't see any of the inks out so be sure to ask when you are in the store.

Most of the pens they stock are in medium and fine nibs and Adam encourages the option of manufacture nib exchanges as the type of nib in a pen is one of the primary distinctions in writing experience.

I asked Adam about his predictions of what he saw in store for the pen business. He is optimistic noting that the pen business in what he has seen has had cycles but he is impressed with the product lines available.

As I sat in a nearby Starbucks and complied by notes of the visit I thought how encouraging it was that a relatively young guy is leading the pen business at Holt's and he is very knowledgeable and optimistic about the pen business.

Do stop by Holt's when you are in Philadelphia.

This store is locaed in the heart of York;s historic arts district. In a classic 1850s building. I have been told that shopping here is the real old world experience. The owner is a graphic artist and has a passion for anything that can be used to write... from typerwriters to pens. The store carries new and vintage pens.